The Innovative Sonnet Sequence: Four of 14: Convention and Constraint 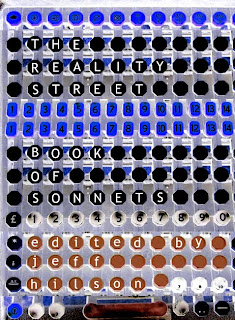 The attraction of the sonnet sequence for British linguistically innovative poets is that it provides a perfect answer to the tension between the long poem and the lyric.‘Linguistically innovative poets seem on the whole to opt for the sequence over the stand-alone sonnet and I think this can be explained by their historical preference for the accumulative and speculative poetic “project” as opposed to the singularity and poise of the discreet lyric,’ writes Jeff Hilson in his introduction to the Reality Street Book of Sonnets. This is true though perhaps he is denigrating lyric poise a little too much. (anthol 16) While there is a contemporary push towards the long poem, particularly in the sequence form that Jack Spicer called the serial poem, there is a contrary pull not only towards the lyric (which is another story) but towards various techniques of constraint and limitation, one seen in its strictest shape in the work of the Oulipo, who innovated widely, even wildly, with sonnets, and in other procedural and conceptual poetics. The Oulipo insist on the distinction between conventions which are sanctioned by tradition (one of the reasons for the frequent return to the sonnet in literary history is for the continuity and authority afforded by simply plugging into previous manifestations of the form) and constraints which are freshly invented for the occasion, and of which innovative sonnets provide a prime example. The sonnet is the one stanza form, with its internal divisions, that may translate into free verse: it is a visibly recognisable form. The sonnet provides a consolidating restraint for the practice of non-metrical poetry, which risks dispersion in long poetry projects, and the innovative sonnet can be put beside other alternative structurings: prose poetry, isoverbalism, concrete poetry and other spatial practices. However, as it always has, the sonnet sequence offers a flexible vehicle for extension and contrast.

It is hard to imagine Roy Fisher or Lee Harwood writing sonnets in the sixties, even though Harwood mixed with New York poets known to favour the form; an early poem praises Edwin Denby. Edwin Morgan’s brilliant ‘Glasgow Sonnets’ (1973) are not innovative in the sense I propose here despite coming from Morgan’s most restlessly innovative collection, From Glasgow to Saturn. Gavin Selerie’s sequences of the late 1980s and early 1990s seemed isolated and out of place among the free and open forms abundant in the London scene. When he ventriloquises Goethe, ‘I’m used to carving from a whole block/ and now, it seems, I need to use glue’, (p. 9 Tilting) he expresses the contrast of writing longer forms to the fiddly small object-poem. Peter Riley and John Welch offer equally isolated examples of sonnets in the 1980s. Paul Evans’ ‘Two Sonnets’ (1979) indeed used glue, and are cut-up sonnets – matching innovation with tradition – but read now as a part of his drift to an inexplicable traditionalism, the kind of formalism of which I’m not speaking here. (See my edition of his work for Shearsman).

There are three practices that permitted the innovative sonnet sequence since as collected in Hilson’s anthology: Berrigan, Raworth and the Oulipo. As Hilson himself says: ‘It’s no exaggeration to say that Berrigan’s poems have been responsible for something of a latter-day sonnet renaissance amongst linguistically innovative poets’, including for an early moment Evans and most recently John Goodby, in his 2010 Illennium. (11) Ted Berrigan’s Sonnets had been anthologised regularly but were out of print until Penguin published a definitive edition in 2000. Collage in form, there was plenty of glue in evidence; Berrigan contrasted his sonnets to his ‘open’ poems. (nice 79)

Around 1986 Tom Raworth abandoned open sequences and wrote 14 line poems, the first 42 published as ‘Sentenced to Death’ in Visible Shivers in 1987. The continuing and concluding 111, written between 1988 and 1990 were published in 1993 as Eternal Sections. More glue: more collage.

The already mentioned Oulipo interest in sonnets, in Queneau’s Thousand Billion Sonnets and in other numerically ordained sequences such as Jacques Roubaud’s Some Thing Black, may have fed into the innovative sonnet craze of our own day, as they rode alongside other Oulipo works – prose texts by Calvino and Perec – which became domesticated in Britain from the late 1980s onwards.

Finally the force of postmodernist play to release the historically-repressed form cannot be underestimated. The sonnet revival was bound to happen. Modernists reviled the form. Williams said ‘All sonnets say the same thing of no importance,’ by which he was negatively confirming my more affirmative sense that forms think because form thinks. But the formal torquing of innovative sonnets ensures that they do not say the same thing, because formal constraints are not ordained conventions.

Note: e.e. cummings and Rilke apart, Williams’ friend Louis Zukofsky was busily writing ‘A 7’ in the 1930s, entuning Marx (and later Spinoza) in sonnets with mathematical values placed upon repetition that prefigures the Oulipo.

Posted by Robert Sheppard at 8:54 am